He was born with Cerebral Palsy, which restricts movement in his arms and legs, which forces him to use a wheelchair. This has made drumming a very serious challenge. Despite this, Andrew has been working successfully all over Australia, and internationally for over 28 years. 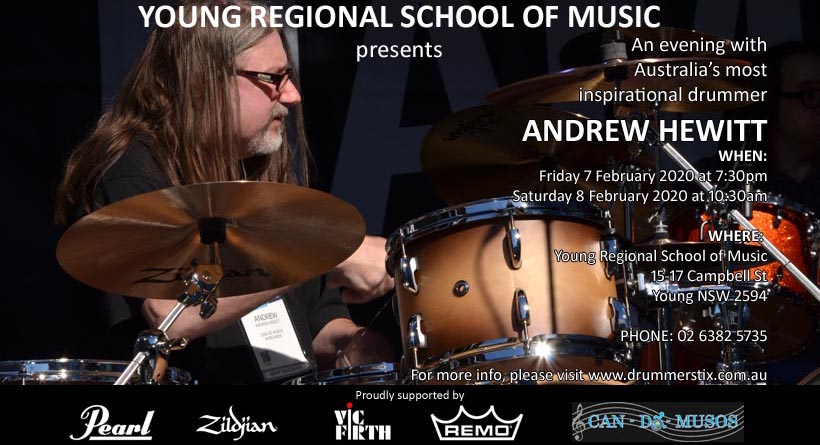 Check out Andrew's interview with Dan Shinder for Drum Talk TV filmed at the Zildjian Cymbals booth at The NAMM Show in Anaheim, California on the 24th January 2015.

He was born with Cerebral Palsy, which restricts movement in his arms and legs, which forces him to use a wheelchair. This has made drumming a very serious challenge.

Despite this, over the past 20 years Andrew has worked successfully as a Performing Artist, Drum Teacher, Drum set Clinician, Motivational Speaker, Workshop Facilitator, and Disability Advocate.

He is also a founding board member of Can-Do Musos, a global voice which has been setup to support artists with challenges from all over the world which was established at a meeting at Dom Famularo's Wizdom Drumshed in Port Jefferson, New York on the 15th March 2013.

In 2014, Andrew was nominated for the prestigious "Australian of the Year" award, and although he didn't make it as a finalist, it was still a huge honor for Andrew.

Andrew is the host of a weekly radio show Can-Do Radio, and a monthly online TV show, Can-Do Musos TV which are both produced in his home studio, sometimes on location.

For the past 4 years, Andrew has presented on a panel with other Can-Do Musos members in at The NAMM Show in Anaheim, California. In 2016, performance was added into the Can-Do Musos presentation, and in 2017, 9 Can-Do Musos from 4 countries had the opening spot on Center Stage at NAMM. In 2019, Andrew joined another group of Can-Do Musos performing on the Arena Plaza Stage at NAMM. In October 2017, Andrew was part of the Berlin & Australia Arts Exchange Project for Arts Access Australia. Andrew did various workshops and performances in Berlin, Germany.

Andrew Hewitt is available for:

Andrew would like to thank Australia Council for the Arts for their assistance funding his overseas endeavours.